I am fortunate to have witnessed two Republic Day Parades ( also Beating Retreat Ceremonies ) in Delhi, one in 1976, and the other in 1977, during my Defence Institute tenure. ( Many in the complex that I live in today were not even born then ).

For momentous occasions of this nature, it is said with pride, that anyone who gets to witness one in life may be likened to seeing them all in life. My joy knew no bounds then.

In recent years I made it a practice to see the events of the Republic Day Parade on TV without fail. It makes me wonder how the celebrations have turned into a great spectacle exhibiting our innovative military arsenals combined with our innovative methods of displaying cultural heritage – the two key elements and characteristics of the nation. It seems to belie/alter the old saying that “one is enough”. May be, one every ten years atleast is appropriate. It is what progress is also about.

This year is unique in that it will be a ceremony without a Chief Guest, without bike stunts in display, reduced invitation and participation,  less time consuming, and less number of tableaux in display. (only 17 compared to the usual 28 or so). Karnataka State this year will have the pride of its tableaux featuring the creation of the new ‘Vijayanagar District’  after the grandeur of the medieval empire. Lord Hanuman on top of Anjanadri Hills will also constitute its impressive display. Everyone of you deserve a pat on the back.

India is not the same now as it was in the 1970s. Here are my three reasons :

1.  India is now more literate than it was in the 1970s. Even the literacy of the illiterates in terms of  ” rights, privileges, strengths, weaknesses, opportunities, and threats ”  is high now. Computer literacy, mobile skills, and tech savvy attitude make for our growing repertoire of abilities today. In a bottom-up pyramidal organisational and societal nature and culture of the present times, the contribution, participation, and ideation of no individual can be dismissed easily. It speaks for the strength of not just the sectors of economy, but embodies the human involvement in every activity – be it sports, leisure, entertainment, festivities, or development. Innovation, admiration, and acceptance follow naturally, transforming the spectacle in all sectors as in R-Day celebrations.

2.  India’s  “youth”  is now a striking force capable of altering the technological focus and Innovation capabilities of what a celebration can make for. Tanks, missiles, and newfangled arsenals in display during the parade stand testimony to our design and development capabilities nurtured through prudent schemes and active research of institutions supported by agencies, government and private. Significant to note in this context is the fact that the ‘top management’ of the nation, no less than our PM in recognition of the value generated made a call a year earlier to start  ‘five’  premier institutions in the country whose research scientists will all be less than 35 years of age, with its Director also of 35 or less in age. That one such institution will be started in Bangalore is something to be proud of (Anyone less than 40 can have their aspirations run sky high in my complex). Also, the recent historic victory of our  young cricket team against the mighty Australians stands in good testimony to the full measure of the performance of youth. David of cricket with a combined total of just 11 wickets in test cricket (pace bowling) tormented and subdued the Goliath of Cricket with a combined total of 1059 wickets (pace bowling) just last week to record a historic snd monumental series win. It  is time for youth to take my credo : “Ready, Step, and Go”.

3.  India’s widening gap between the rich and poor is gaining serious attention now. Efforts to remedy the concerns with prescient programs seems to have brought a fillip to the general standards and quality of life of those even distantly removed. Even the political dispensation that first recognised the existence and the need for uplifting the marginalised and downtrodden with real sacrifices for the nation seems to have got sucked In the whirl of yielding without restraint feeling impuissant. The new millennium with the accompanying technological prowess, however, has brought new life in the eyes of millions opening new vistas hitherto unnoticed. The tableaux of the parade through the years vividly describe some of these journeys. 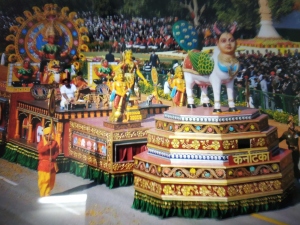 Karnataka Tableau that won the best Cultural Depiction prize in 2013.

I visualise the above three facts making not just our Republic different,  but the Republic Day too different now.

(b)  That I cannot forget the day in 1976 (Republic Day) since that was when Sunil  Gavaskar, then my favorite cricketer, scored a century in his first test as captain , in Auckland, New Zealand. Also, that was the day when our simple, sincere, honest, and straightforward leader, K Kamaraj, was awarded posthumously the Bharath Rathna. Then President, late Fakhruddin Ali Ahmed, made his call for “Peace and Self-discipline”.

Tidbit :  ” India has 2 million Gods and worships them all ;  in religion all other countries are paupers, India is the only millionaire ” – Mark Twain.